Datavideo today announces KMU-200, a 4K Multi-Channel Touch Screen Region of Interest Switcher with built-in streaming and recording. The KMU-200 is the latest addition to Datavideo’s KMU Series based on the award winning KMU-100, 4K Multi-channel Processor.  The KMU series provides region of interest switching based on a 4K camera signal.

Datavideo KMU-200 transforms this new market category with Multi-Channel Touch Screen, Streaming & Recording all-in-one switcher.  The KMU-200’s all-in-one design is similar to the Datavideo Hand Carried Mobile Cast Studio line of switchers bringing switching, audio mixing, recording and streaming into a compact, portable system. It makes it easy to take it on the go. Since it is an all-inclusive unit, you do not need to lug around multiple video production equipment. KMU-200 does it all in its compact form.

Popular social media platforms are best viewed and highest engagement in vertical mode using smart phones. The KMU-200’s workflow has both horizontal (16:9) and vertical (9:16) switching modes.  Horizontal streaming is the current norm, however vertical video content is growing in popularity due to smart phones where most content is consumed in portrait mode.  The KMU-200 provides professional and engaging vertical video productions with multiple camera angles and high-quality audio. The built-in encoder streams directly to popular CDN platforms such as Facebook, YouTube or Instagram in vertical or horizontal modes, giving you an option to open up your live stream to more social platforms. Record your live events or weekly sermons with a built-in SD card recorder. You no longer need to add an external recorder or encoder for streaming or recording your production.

A single 4K camera can be utilized to obtain four cut outs or regions of interest and the full screen view, plus another HDMI input for an additional camera or computer. This concept simplifies your workflow since you do not need to have multiple cameras in your workflow to obtain multiple shots. KMU-200 has a touch screen panel for multi-touch control, so you can easily set up your shots or bring up a menu with the touch of your fingertips. One person can control the camera shots, switch, monitor, record, and stream your production. You do not have to rely on multiple volunteers to come in to do your church production.

“The KMU-200 is perfect for smaller houses of worship applications or panel interview applications.  With Social distancing becoming a new norm, the KMU-200 reduces the need to have multiple crew members to produce and stream your production,” says Craig Moffat, Managing Director of Datavideo US. 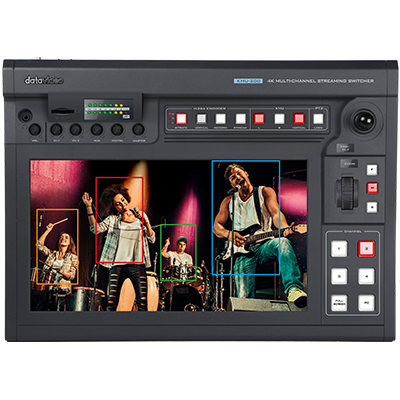