What is Frame Rate?

One of the essentials you should know is the “Frame Rate” to learn the process of video production.  Before talking about the frame rate, we must first understand the principle of animation (video) presentation.  The videos we watch are formed by a series of still images.  Since the difference between each still image is very small,  when those images viewed at a certain speed, the fast-flashing still images give the appearance on the human eye’s retina which results the video we watch.  And each of those images is called a “frame.”

What are the NTSC System and the PAL System?

When television comes to the world, the television also changed the video frame rate format. Since the monitor presents images by lighting, the frame rate per second is defined by how many images can be scanned within one second. There are two ways of image scanning-"Progressive Scanning" and "Interlaced Scanning."

Progressive scanning is also referred to as noninterlaced scanning, and it is a format of displaying in which all the lines of each frame are drawn in sequence. The application of interlaced scanning is due to the limitation of the signal bandwidth. The interlaced video applies the traditional analog television systems. It has to scan the odd-numbered lines of the image field first and then to the even-numbered lines of the image field. By quickly changing the two "half-frame" images make it look like a complete image. 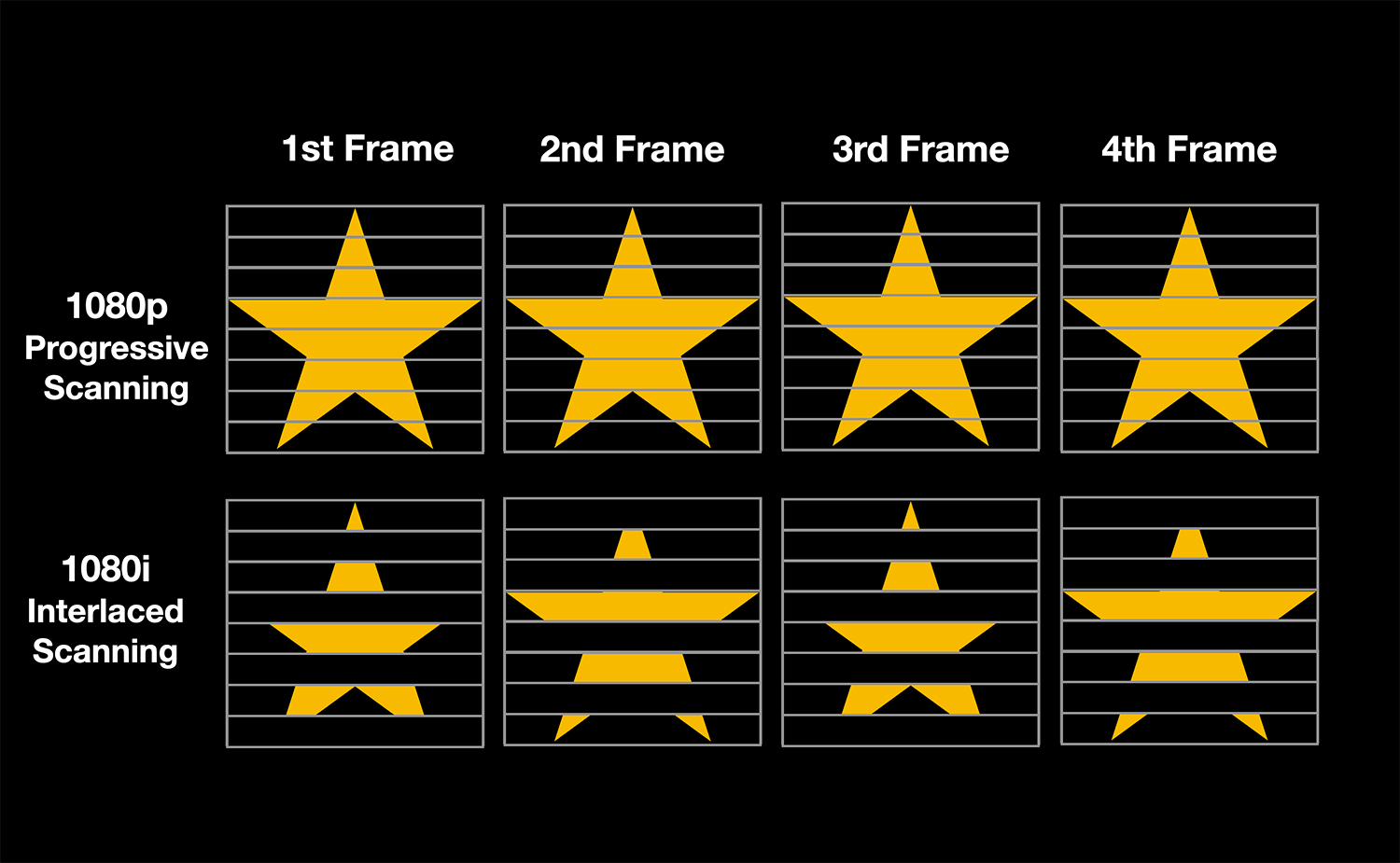 To avoid the interference and noise generated by current and TV signals at different frequencies, the National Television System Committee (NTSC) in the USA has developed the interlaced scanning frequency to be 60Hz, which is the same as the alternating current (AC) frequency. This is how the 30fps and 60fps frame rates are generated. The NTSC system applies to the USA and Canada, Japan, Korea, the Philippines, and Taiwan.

If you are careful, do you ever notice some video devices note 29.97 and 59.94 fps on the specs? The odd numbers are because when the color TV was invented, the color signal was added to the video signal. However, the frequency of the color signal overlaps with the audio signal. To prevent the interference between video and audio signals, American engineers low 0.1% of the 30fps. Thus, the color TV frame rate was modified from 30fps to 29.97fps, and the 60fps was modified to 59.94fps.

Compare to the NTSC system, the German TV manufacturer Telefunken has developed the PAL system. The PAL system adopts 25fps and 50fps because the AC frequency is 50 Hertz (Hz). And many European countries (except France), the Middle East countries, and China apply the PAL system.

Today, the broadcast industry applies 25fps (PAL system) and 30fps (NTSC system) as the frame rate for video production. Since the frequency of AC power is different by region and country, so be sure to set the right corresponding system before shooting the video. Shoot video with the wrong system, for example, if you shoot the video with the PAL system frame rate in North America, you will find that the image flicking.

The Shutter and the Frame Rate

How to Use the Suitable Frame Rate

The frame rate of a video dramatically impacts how the footage looks, which determines how realistic the video appears. If the video production subject is a static subject, such as a seminar program, lecture recording, and video conference, it is more than enough to shoot video with 30fps. The 30fps video presents the natural motion as the human visual experience.

If you want the video to have a clear image while playing in slow motion, you can shoot the video with 60fps. Many professional videographers use the high frame rate to shoot video and apply lower fps in post-production to produce the slow-motion video. The above application is one of the common approaches to create an aesthetically romantic atmosphere through slow-motion video.

If you want to freeze the objects in high-speed motion, you have to shoot a video with 120fps. Take the movie "Billy Lynn in the Middle" for example. The movie was filmed by 4K 120fps. The high-resolution video can vividly present the very details of images, such as the dust and splattering of debris in the gunfire, and the spark of fireworks, providing the audience an impressive visual perception as if they were personally on the scene.

Finally, we would like to remind readers must use the same frame rate to shoot videos in the same project. The technical team must check that every camera applies the same frame rate while performing the EFP workflow. If Camera A applies 30fps, but Camera B applies 60fps, then the intelligent audience will notice the video's motion is not consistent.