The eSport industry has emerged rapidly in the past few years. The size of the eSport industry is growing every year but it is still a relatively small market compared to consumer electronics. According to an investigation report generated by Newzoo, a research institute that conducts surveys of eSport, the industry has generated revenue of 700 million US dollars globally in 2017 and it is expected that the market size will increase drastically to 1.5 billion US dollars by 2020 showing a great potential for market growth in the eSport industry.

Many electronic manufacturers realize that the emerging eSport industry should not be overlooked, not only because the gaming devices contribute higher margin than the ordinary computer hardwares, but more importantly, eSport is a great opportunity for companies to display their most advanced products and technologies. During the intensive and fast-changing gaming, the performance of gaming devices not only affect players’ sensory experience, they are also more likely to affect the players’ performance and even become the key to the game's outcome.  This is why eSports players only adopt the most high-end computer hardware devices.   Driven by the demand for high-quality devices from those professional eSport players, gaming is no longer just an entertainment, but a driving force for innovating hardware and software.  The essential of eSport to the 3C industry, just like Formula 1 Racing to the automobile industry.  Thus, eSport could be considered as the leading indicator of the computer hardware industry.

(Pic 1: The numbers of eSports audience are huge.)

(Pic 2: The value of esports continues to rise, and even the prizes for eSport competition are very impressive.)

Although AV company is not the spotlight focus in the esport broadcast, we are the teams behind-the-scenes that is too important to be overlooked.  In 2017, the number of eSport viewed reached 380 million in global, and the regular audience accounted for a half.   With the booming esports industry, there will be more and more demand for broadcasting eSport competitions in the future.  Thus, it is necessary for all of the partners in the AV industry pay attention to the emerging esports market.

In comparison to the broadcast of news reports, sports events, and music concerts, eSport is a kind of new broadcast event, which leads to the question of what kind of switchers will be appropriate for eSport broadcast.

ESport broadcast adopts EFP workflow to capture multi-images — 2 or up to more than 10 team-players, commentators, and of course, the most important, the game images.  Besides, logo insertion and lower-third are also applied in eSport broadcast.

As a result, a switcher for eSport broadcast requires more video inputs than studio broadcast.  In order to support multi-channel video inputs, the switcher for broadcasting eSport should be able to support 12 channels of video inputs at least so that director will have sufficient image sources for switching.  The varieties of images make the video broadcast looks fancier and more exciting.

(Pic 3: The eSports team consists of multiple players thus requires multiple cameras to capture all of the team members' image.)

There are many interesting images that audiences don’t want to miss it during the eSport matching.  For example, images of commentators, players, the scoreboard and of course, the screen of the game.  In order to display multi-images on the screen at the same time, switchers with only one-set PIP is not enough for eSport broadcasting.  And therefore, switchers equipped with three or even more sets of PIP will be a great advantage.

ESport industry is a huge cluster which includes various game software, hardware, and even telecom companies.  Owing to the high competition among the 3C industries, many companies are very enthusiastic at looking for media exposure.  Just like other sports games, esport events are good opportunities for these companies to market their brands to consumers.  In order to place the logos and brand names of sponsors on the program screen, the switcher for eSport broadcasting must have features of logo insertion and luma keyed subtitles.

What makes it is interesting to watch eSport game not only the game itself but also the broadcast style of the commentators.  Commentator plays a crucial role in the eSport broadcast.  Especially at the beginning and the end of the game, commentators are always the key roles on the program image with no doubt.

Just like the other sport events, the esports commentators perform live broadcast either on-site or in the studio.  Thanks to the chromakey technique, the applications of virtual scenes, images, charts, and tables allow commentators are able to perform commentary in a creative way.

The Feature of Stinger Transition

As a professional live event director, it is very critical to grab the timing of video switching.  Esport broadcasting is about bringing exciting atmosphere to the audience, a wide variety of transition effects is thus very important in terms of video switching.  Besides the basic WIPE and MIXED effects,  the rich stinger transition effects will definitely escalate your eSport broadcast to the next level.

(Pic 7: The eSports commentators broadcast in the studio with high-end virtual effects.) 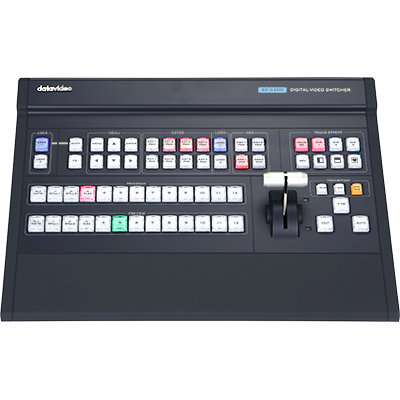